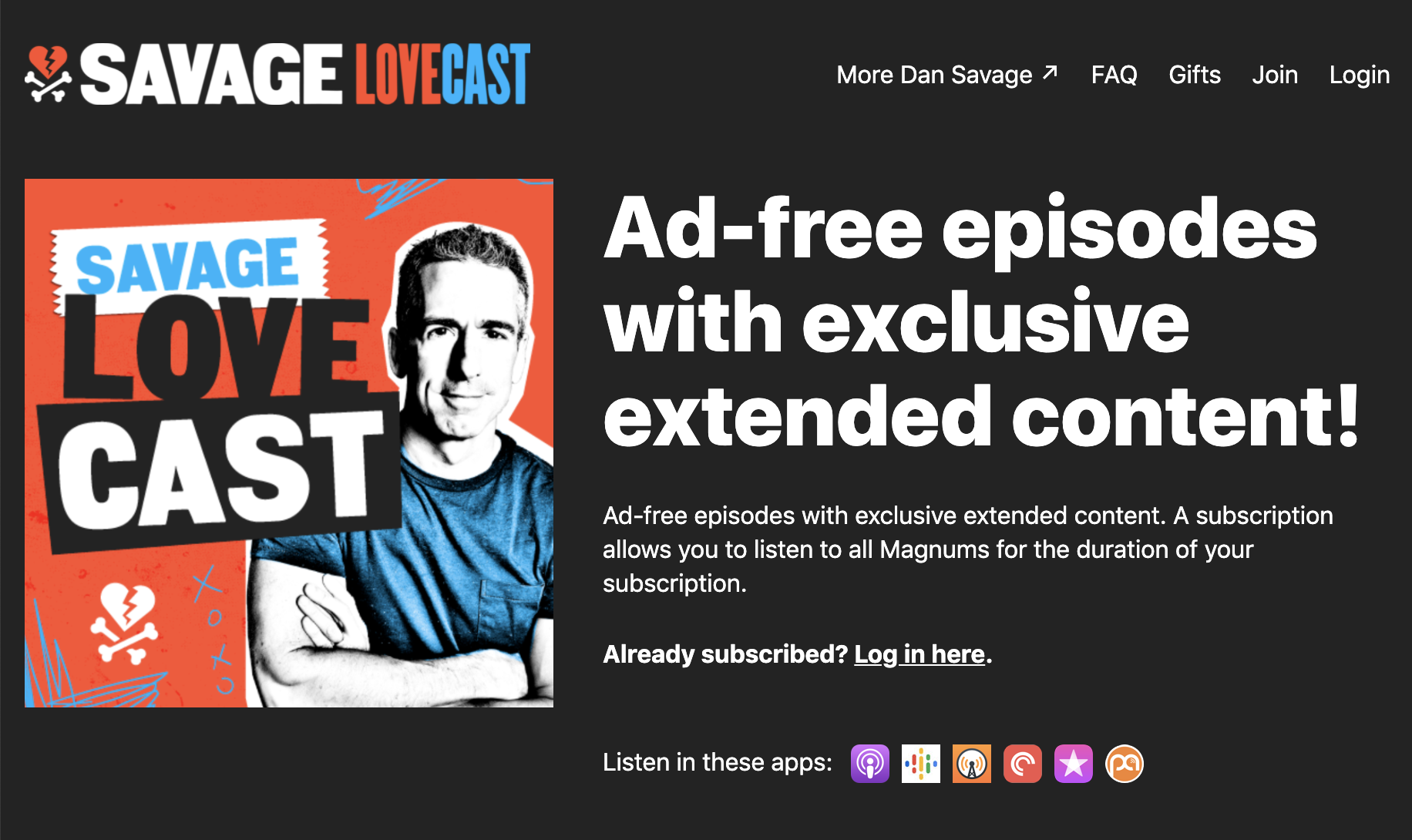 We’re thrilled to share the news that Dan Savage’s podcast, the Savage Lovecast, is now working with Supporting Cast for sales of subscriptions and delivery of extended, ad-free episodes!

Savage Love, part of Index Media, launched back in 2006, shortly after the invention of podcasting. It was one of the very first podcasts to offer a paid version of the show. They paved the way for thousands of creators to monetize podcasts via exclusive content, including Slate Plus — in fact, it’s likely Supporting Cast itself wouldn’t exist without their example.

So it’s hugely meaningful to us that when the Index team decided it no longer wanted to maintain its own premium subscription platform, they chose to partner with Supporting Cast to deliver a superior member experience and maximize subscription revenue. Plus, many of us are fans of Dan’s podcasting and writing, and we take pride in the role we’re now playing in helping to support a leading national advocate for the LGBTQ+ community.

"Supporting Cast reached out to us and we were immediately impressed with their system," said Rob Crocker, president of Index Media. "Signing on with them lets us concentrate all our resources on producing great content and getting the benefit of partnering with a company focused on delivery and a great customer experience."

Now that the Savage Lovecast’s premium "Magnum" edition is delivered through Supporting Cast, members can add their personal feeds to their podcast app in just two taps. The Index Media team can see who’s listening to exclusive audio, and prevent members from sharing premium content with non-members. The show will also be able to take advantage of our dynamic messaging system to deliver targeted announcements to members—to welcome messages to new members, for example, or to offer promo codes to win back lapsed members. And Supporting Cast is taking over member support, freeing Index Media staff to focus more of their time on production.

Index Media naturally wanted to avoid any disruption for current subscribers, like asking members to add credit card details to a new system or making them set up a new private feed in their podcast app. So our two teams collaborated closely over the summer to ensure a smooth transition. (If you want the technical details on how we did this, we’ll be happy to share.) Since launch in early September, subscription revenue is up over 20% over the same period last year.

We look forward to breaking new ground together with Dan Savage and the Index Media team in the years to come!